Azure Active Directory application roles help you implement role-based access control (RBAC) in your applications. In this post, I’ll cover how to work with them. I’ll be using a simple Flask app to demonstrate, but the important bits happen in a few key API calls, so this method is transferable to other environments.

Specifically, I will cover how to:

As mentioned, I’ll be using a barebones Flask app in this post. You can download it here and follow along. You’ll want to copy resources/config.env.example to resources/config.env and fill in the values below as we proceed through Azure AD. To start, TENANT_NAME is found on the main page of Azure Active Directory and looks like *.onmicrosoft.com.

If you’re already familiar with creating apps in Azure AD, you can skip the next section, continuing with Create roles within the app.

Create an app in Azure AD

On the next screen, choose an app name. You will need this later. Select Web app / API as your application type, and enter the sign-on URL. 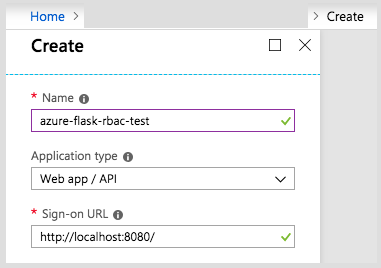 If you’re using the sample app linked above, you can put http://localhost:8080/ as the sign-on URL. Also, in your config.env, set APP_NAME to the app name you just chose.

After you click Create, you will see the card for your app as below with a couple more values:

Now, click on Settings to open the right blade, and then Keys. Fill in a name for the description of the key, choose a validity period, and then click Save. After saving, the value will be displayed, but only once, so copy it somewhere. This is CLIENT_SECRET in config.env. Keep it secret, keep it safe, don’t commit it to your repos.

Finally, configure the Reply URLs pane. If you’re using the accompanying sample app, fill in http://localhost:8080/get_a_token. Save this configuration.

Create roles within the app

Back on the app card, click on Manifest to open the app’s manifest. This is where you’ll add the JSON to create the roles within the app.

At the top of the manifest object, there’s an empty array called appRoles. Every object in this array represents a role, and has this format:

Create your role objects, and add them inside the appRoles array, as in the following excerpt where I create two:

On the main app card, click on the link under ‘Managed application in local directory’. From here, select Users and groups. If your account is already added to the application with ‘Default Access’ as the role, delete this entry by checking the box and clicking Remove. Now, click on Add user. On the next page, you can select a user and then a role to assign to them. If you have Azure Active Directory Premium, you can also select Active Directory groups here and assign roles to them. Note the displayName from your role objects here. 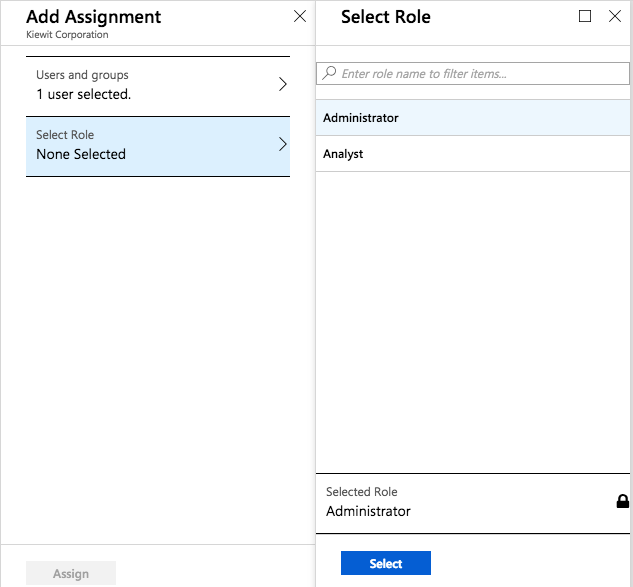 Select and assign the role.

Retrieve assigned roles and map them to your app’s roles

To get application role of a logged in user, there are three steps:

For 1., you can perform a GET against the endpoint https://graph.microsoft.com/beta/me/appRoleAssignments/ with the logged in user’s access token, as in the sample app’s get_user_role_assignment() function. The response looks like this:

The resourceDisplayName is the app name from earlier, so you will filter on this attribute in your application. The appRoleId is the GUID assigned to the app role in the manifest.

Speaking of the manifest, for 2., you can perform a GET against the endpoint https://graph.microsoft.com/beta/applications/<app object id> with the ‘Object ID’ (config.env’s APP_OBJECT_ID) from above and the same access token. In the sample app, this happens in the get_app_roles() function. The response looks like this, essentially an expanded form of the manifest:

The id attribute of each element of the appRoles array is the same GUID from the previous call.

For 3., then, you can determine the logged in user’s applicable roles by compiling the appRoleIds from the role assignment call where resourceDisplayName is equal to your current app, and query the appRoles array for the application where the ids of the inner objects are on the list, as in the second half of the sample app’s get_user_role_assignment() function.

At this point in a real Flask app, you could combine the role information with a function decorator on your view functions to implement controls, or forward the role names to a downstream system, or both.